Common and often very visible, cracks in plaster ceilings seem an inevitability in older, historic buildings. Not all cracks are the same and some will continue to return if the root cause is not properly remedied. Once underlying issues are resolved, plaster can be restored in the typical fashion, unless extenuating circumstances prevent this. Cracks can occur due to problems that are difficult to rectify, such as uneven distribution of load; In such cases, adjusting application techniques and plaster mix can help minimize future cracking. The following are some of the most common reasons for cracks to start forming in historic plaster ceilings. 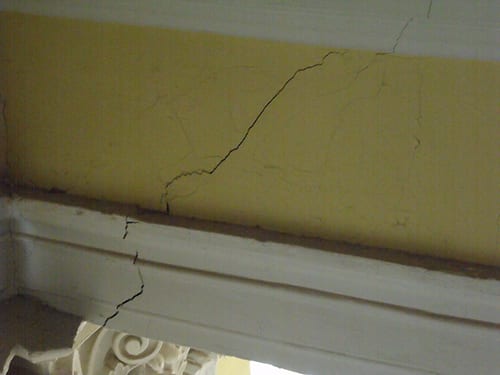 Settlement of the Building

Buildings often find there place over time, shifting stubbly in different directions over decades and centuries. As the building moves, pliable surfaces move with the building, while rigid and bridle surfaces crack and crumble.

Though water is an essential part of the plaster mix, humidity, leaks, and floods will cause irreversible damage to plaster finishes. When water is involved, it is best to get help early to ensure that there is no structural damage and that mold does not start growing. 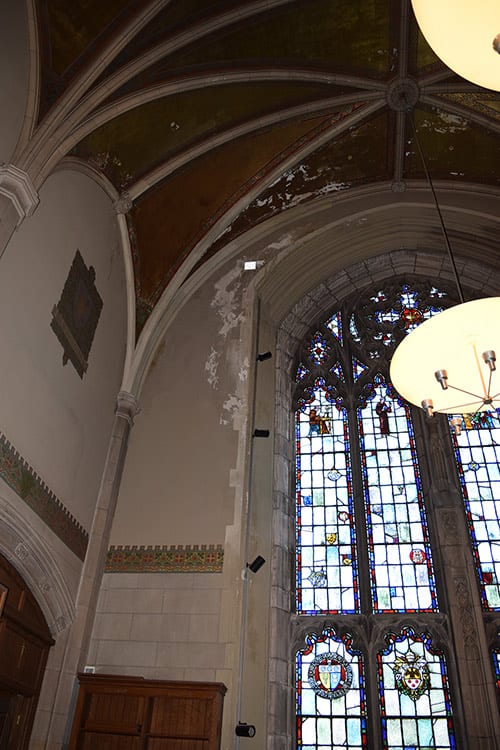 Plastered surfaces in older buildings are prone to drying out and other age-related problems. Ensuring that repairs take into account relevant historical context will prevent further damage and might help produce a new plaster surface that can outlast the original.

Plaster ceilings are difficult to reach and are not a simple repair. Detaching lath and movement of structural supports typically requires invasive means to correct. Similarly, water damage is not a simple fix and can have lasting implications if it is not remedied quickly and correctly, by a professional. The cause of ceiling cracks listed above cannot be filled with putty, or quickly patched—an expert is needed to assess the cause and develop a treatment plan. If you are dealing with plaster issues, a plaster conditions survey maybe required.  Using a professional that specializes in historic plaster services is the best path to take in resolving the issues.