Every year St. Patrick’s Day is widely celebrated with feasts, green beer, parties, and parades. Chicago dyes the Chicago River green, New York hosts the largest and oldest St. Patrick’s Day Parade, and Irish or not most everyone wears green, drinks and dances. But who really was Saint Patrick?

We know Saint Patrick very well. In fact, we have studied him in every artistic medium from stone and paint to the design and dedication of entire churches. Along the way we have learned quite a bit about the Saint’s history beyond the legends of leprechauns and shamrocks.

The Basilica of St. John the Evangelist originally featured balcony seating in the transepts. The removal of such a major architectural design element subsequently created a design problem. As a solution, Canning designed grisaille paintings, a form of trompe l'oeil, for the transept walls of the church. These designs gave strength to the walls and properly filled the negative space. Below provides a look into the design solution for the transept wall. St. Patrick appears to the left of the window.

At the Basilica of the Immaculate Conception, Canning completed a cleaning of all the stone statues throughout the church. In the church narthex two impressive statues flank the entry, one of St. Paul and the other of St. Patrick. The intricacies in the beautiful statuary offer the perfect place for dirt and grime to collect over time. The cleaning and conservation of the statuary marble had to be done very gently. We used a latex based cleaner that envelopes the dirt and dries to a flexible coating that can then be peeled away. Surface dirt that remained was washed away using conservation-grade solutions that do not harm the stone. Below the statue before cleaning can be seen on the far left, during the cleaning with the latex coating, the coating being peeled away, and finally on the right, the St. Patrick statue restored and decorated for his feast day, March 17th.

HISTORY OF THE COLOR GREEN 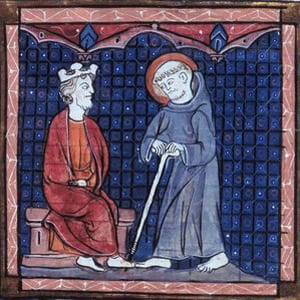 The original color of St. Patrick was not green but blue. The color was significant in Irish mythology and it is believed that St. Patrick adopted the color just as he was, in a sense, adopted by the Irish as their patron saint despite being a foreig

In 1571 Henry VIII declared himself King of Ireland and symbolically incorporated Ireland into the English coat of arms with an Irish harp on a deep blue background. This imagery is still consistent with the Irish Presidential Flag. Blue was again used by King George III in the creation of the Order of St. Patrick. The Order ceased to exist in 1922 when the majority of Ireland gained independence from England and the color green became the dominant representation of the Irish and St. Patrick.

During the Irish Rebellion of 1798, green was adopted as a symbol of Irish pride. Wolf Tonne and the United Irishmen made up of Irish Catholics, Presbyterians and those in favor of Irish independence from England, carried a green flag with an Irish harp. This rebellion was suppressed by the English but unrest in the country continued to fester. During the Easter Rising in 1916, the Green Harp Flag was raised atop Liberty Hall where the Irish Republicans began their march on the General Post Office (GPO). The Irish republicans held the GPO for a week until their surrender to the British. Following the surrender many were arrested and 90 were sentenced to death, 14 of which were executed by firing squad at Kilmainham Gaol. One of the men executed was Joseph Plunkett, an accomplished poet later made famous by the Irish sung ballad Grace. The Easter Rising marked a very important moment in Irish history and set the stage the War for Independence, 1917-1922. 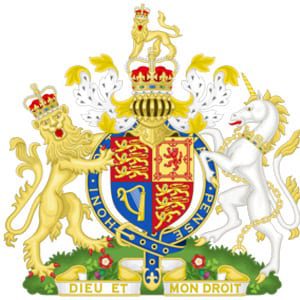 The colors of the Irish Flag are reflective of history the religious and political divide in Ireland. Orange representing mainly Northern Irish Protestants, sympathetic to England and green representing the different parties, fighting for political and religious independence from England. The Irish Protestants chose orange in honor of the Battle of Boyne, 1690, where William of Orange later William III defeated the Catholic, King James II. This victory and subsequent English rule over Ireland, secured Protestant domination in the country. The parties involved in the rebellion banded with the color green, representing the birth of new freedom and independence as well as the green landscape of the country. The white in between the two provides a hope for peace.

A BRIEF HISTORY OF ST. PATRICK

Shortly before Saint Patrick died in the late 400s, he wrote a summary of his life’s work, which became known as The Confessions of St. Patrick. This document provides a generally undisputed history of the Saint’s life.

Patrick names in his Confessions, Bannaveum Taburniae as his home. The exact whereabouts of this town are unknown. He references Britain in Section 43 of his Confessions as his homeland, “I could wish to leave them to go to Britain. I would willingly do this, and am prepared for this, as if to visit my home country and my parents.” Many believe the location of this town was in either lower Scotland or Wales, at the time, occupied by the Roman Empire.

Patrick’s father, Calpornius, collected the imperial taxes for the area and was a member of the Roman ruling class in the settlement. His mother, Conchessa, was a distant relative of St. Martin de Tours and of French descent. Patrick was actually given the name Maewyn Succat at birth and changed his name Patrick upon joining the priesthood.

At the age of 16, Patrick, was captured by Irish pirates, brought to Ireland and sold as a slave. For six years, Patrick herded sheep and pigs in the green fields of the foreign country. As a young boy, Patrick grew up with all the comforts of the time and an innate sense of superiority; slavery in Ireland was not only a culture shock but also an extreme change in Patrick’s standard of living and day to day life. In his Confessions, he mentions the hunger, cold and solitude he experienced in Ireland He wrote that his time in Ireland allowed him ample time to pray and grow in the Faith. And so regards his captivity not as misfortune but as “great blessings and such a gift that the Lord so kindly bestowed… (Confessions, Sec. 3)”

One night a voice called out to him saying, “Look – your ship is ready.” Patrick left that night in search of his escape but the ship was not nearby, but a good two hundred miles away. Patrick, a foreigner and a slave in a land unknown, found his way home by way of a sincere and unshaken trust in God. His faith was rewarded, sure enough he came upon a ship ready to set sail (Confessions, Sec. 17).

Patrick traveled with the crew three days at sea and 28 through the wilderness. While traveling on foot with the crew, supplies ran out and the men were overcome with hunger. With confidence Patrick said aloud, “Turn in faith with all your hearts to the Lord my God, because nothing is impossible for Him, so that he may put food in your way – even enough to make you fully satisfied! He has an abundance everywhere (Confessions, Sec. 19).” To the surprise of everyone, including Patrick, a herd of pigs came running through the forest.

Finally, Patrick returned home to his parents in Britain. They were overjoyed for they feared they would never see him again. While at home, Patrick had different dreams encouraging him to return to Ireland and become an advocate for the conversion of the country and her people. He studied to become a priest and after much effort, fore he was very behind in his studies due to his captivity, was ordained.

The slideshow explores the different phases in the production of the trompe l’oeil painting of St. Patrick for the Basilica of St. John the Evangelist in Stamford, CT. 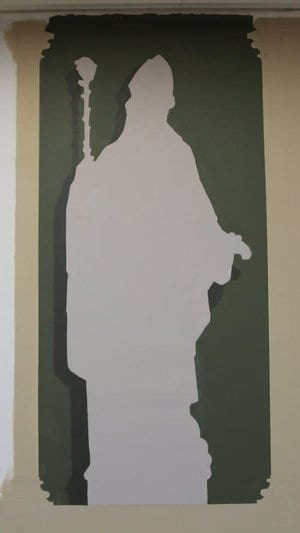 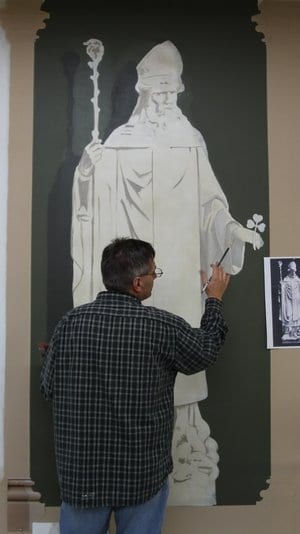 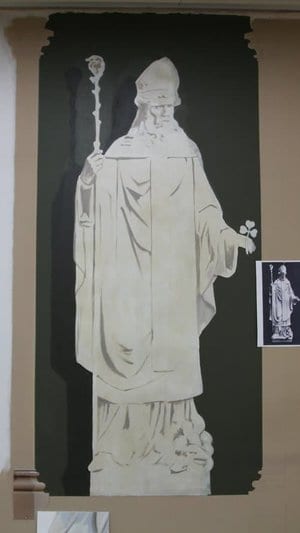 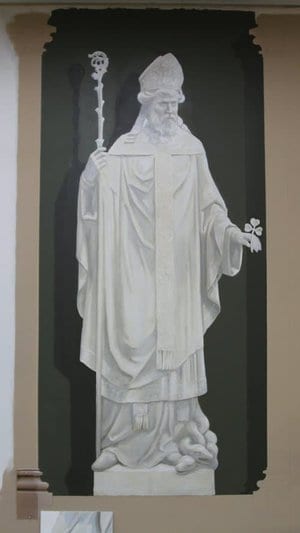 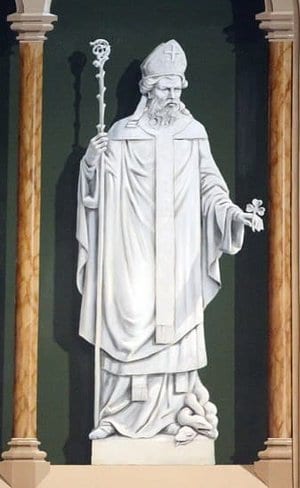 Patrick speaks of his different struggles as a Bishop. Times of despair haunted by the sins of his youth and betrayed by friendships he thought true. He attributes his time in captivity as a time of confession and repentance writing, “it was very good for me [captivity in Ireland], since God straightened me out, and he prepared me for what I would be today. I was far different then from what I am now, and I have care for others, and I have enough to do to save them. In those days I did not even have concern for my own welfare (Confessions, Sec. 28).”

Serving as Bishop in Ireland was no easy task. Patrick and his followers were often taken prisoners and stripped of all their earthly belongs, more than once feared for his life and stood unjustly in courtrooms stacked against him. “It was not by my own grace, but God who overcame it in me, and resisted them all so that I could come to the peoples of Ireland to preach the gospel. I bore insults from unbelievers, so that I would hear the hatred directed at me for traveling here (Confessions, Sec. 37).” His perseverance, love of the Irish people and trust in the Lord drove him on and saved him from these perils.

Patrick closes his Confessions as follows,

“I pray for those who believe in and have reverence for God. Some of them may happen to inspect or come upon this writing which Patrick, a sinner without learning, wrote in Ireland. May none of them ever say that whatever little I did or made known to please God was done through ignorance. Instead, you can judge and believe in all truth that it was a gift of God. This is my confession before I die (Confessions, Sec. 62).

Few will argue St. Patrick “did little” for Ireland in his time as bishop but few truly know how great the man was as an individual and a leader. Everyone to read through The Confessions of St. Patrick to better understand the life of the Saint we celebrate and love. He is humble yet unapologetically courageous and a brilliant example to us all.

Full restoration of the interior color palette, Stations of the Cross, replication of artwork at bas relief and faux stain glass window design development and production.