Our Lady of the Rosary & The Battle of Lepanto

A stage set for battle…

Western Europe watched with little interest as the Ottomans besieged the Island of Malta in May of 1565 and at Zigidfar, Hungry in August of 1566. In both instances, the European states wagered personal short term interests while gambling the innocent lives of those under siege rather than consider the long term fortification of Europe. Victory at Malta was an unexpected surprise to the whole of Europe and though Zigidfar was a defeat, the month long siege had caused such carnage on both sides, the Ottomans were forced to postpone their march on Vienna. Both conflicts protected Europe from any immediate Ottoman invasion. 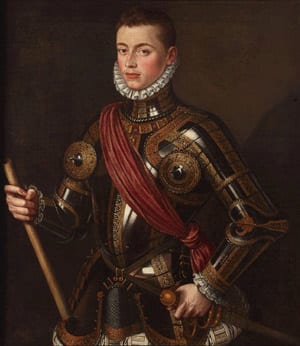 John of Austria in Armour by Alonso Sánchez Coello, 1567.

The state of the affairs at the time placed the Vatican in a two fronted war with battles both theological and militaristic: to the North, the Reformation and already multiplying into countless Christian reform sects and to the East, the growing threat of the Ottoman Empire. In light of these dangers, the great Pope Saint Pius V issued a call to arms to protect Europe from the imminent Ottoman invasion.

On March 7th 1570 the Pope formed the Holy League with Genoa, Spain, and the Papal States. The Venetians, though in open war with the Turks over Cyprus, refused to join the League. Without the Venetian navel forces, the Holy League would have little chance of defeating the Ottomans at sea. It was not until corsair cannon-fire was within range of St. Marks Basilica that Venice finally joined forces with Rome and the ranks of the Holy League. France and England openly ignored the call.

The fleet forming was to led by Don John of Austria, the bastard son of Charles V and half brother to Philip II of Spain. At only 24 years of age, Don John of Austria was already an accomplished young man, known for his great bravery in battle and mercy for upon defeated.

Until August of 1571, the Venetians held the Eastern most corner of Cyprus, Famagusta in siege against the Turks. When all supplies ran dry, the Venetian governor of the city, Astorre Baglioni, was forced to surrender. Following the city's surrender, the soldiers and civilians alike were brutally slaughtered and the Ottoman forces continued on in their assault on the Christian West. At this same time, young Don John of Austria prepared his fleet comprised of ships from Venice, Spain, Naples, Portugal and Genoa; together they set sail from the coast of Sicily to meet the Ottomans at sea.

The Christian and Ottoman forces convened at the Gulf of Patras off the coast of the town Nafpaktos (“Lepanto” is the distorted Venetian pronunciation of Nafpaktos). By this time, news of the brutality at Famagusta had reached the Holy League and justice was ready to be served.

Both the Turks and the Christians understood this battle to be as much a spiritual conflict as it was physical. As the eve of the battle darkened with uncertainty, the Christian fleet cut through the sea with ship decks filled with soldiers on their knees praying the Rosary. In Rome, Pope Pius and overflowing churches prayed the same beads in hope for Christian victory.

All at once, in a single, miraculous breath, the wind changed 180 degrees to favor the Christian force. The Blessed Mother and her Holy Rosary heard the prayers of Christendom and came to their rescue. With a cheer the League met the Turks beneath the banner of Christ Crucified and with the wind at their back. 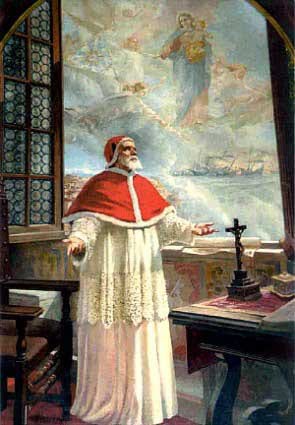 Pius V receiving a vision of the victory. Artist, Unknown.

The battle fighting ensued on the ship decks, men meeting there demise in the most swift and gruesome fashion. The Christian galley slaves filed through their chains and stormed the Ottoman decks from below. In a moment of uncertainty, the Spanish reserve forces came to the rescue and the Holy League was victorious.

The day of the battle, Pope Pius V received a vision of the victory and called for celebration and thanksgiving.

The Christians and Ottomans were well matched and well lead. The defining factor rested in the divine intervention of Our Lady and the Rosary. The crushing defeat of the Ottomans, the loss of men, generals, weapons and ships, forced the Turks to stagger back to Constantinople; thus ensuring the protection of Rome and the borders of Christendom.

The cannon and musket fire from both sides of the fighting caused inconceivable carnage. The battle lasted five hours resulting in a death toll of almost 50,000 men, a casualty number from a single battle that would remain unmatched for nearly 400 years.

An event that continues to inspire…

The battle inspired the hearts and souls of many as well as incredible literature. The celebrated Spanish author, Cervantes, fought alongside Don John of Austria at the Battle of Lepanto and penned an account of the battle in chapter 39 of Don Quixote. Hundreds of years later, G. K. Chesterton’s poem Lepanto would grace the newspapers with unmatched rhyme and meter.

Pope Saint Pius V declared the date of the battle, October 7th, a feast to Our Lady of Victories and his immediate successor, Pope Gregory XIII, renamed the feast as we know it today, the Feast of Our Lady of the Rosary. Victory, Our Lady and the Rosary are bound together on this day in memory of battles won and for courage in battles yet to come.

FOR MORE INFORMATION ON THE BATTLE OF LEPANTO, WE SUGGEST:

Lepanto: The Battle that Saved the West

A riveting lecture by Christopher Check detailing an account of the Battle as well as background on Don John of Austria and Chesterton’s poem. The audio format proves perfect for car rides and the content is invaluable to your own edification. A must purchase.