Some of the most impressive displays of delicate plaster work can be found when you look up in a space. Architectural schools of the early 15th through late 18th century focused on creating grand, elaborately decorated spaces that use excessive scale and open space to achieve their desired effect. Intricately crafted to impress wealth, status, and position, the grand rooms of mansions and government office buildings offer considerable insight into the various tastes, techniques, and motifs of different decorating styles. We will review plaster ceiling motifs from five different architectural movements that appear in prominent buildings thought the United States. Though some of these periods precede the founding and settling of much of the United States, various revival movements and re-interpretations of historic European buildings have resulted in excellent and nearly pure domestic manifestations of each movement.

Post-Renaissance Rome was bubbling with creativity and eager artisans of their day wanted to push the envelope further and further. Often governed by confining artistic rules and strict parameters within each artistic school, budding artists took it one step further and introduced the essence of what would become the German Baroque movement. Symmetry, scale, and geometric arraignment gave way and soon fluid, vibrant, and asymmetrical designs started to take shape. Often, motifs started on the ceiling and worked their way down to fully envelop a space with a distinctive feel. Gone was dark, heavily carved wood and in came light, easy to mold and carve plaster onto which paint, gold leaf and other ornaments could be more easily applied. The Church was quick to latch on to this new style, transforming simple church interiors into majestic creations mirroring heaven. Exuberance abounded and all forms of ornamentation were welcomed. This style remains closely associated with European nobility-- specifically the German and Austrian royal courts.

• Murals- large murals and fresco often filled the main expanse of the ceiling, with small related adorning surrounding lower layers of the ceiling. Religious scenes specifically apotheosis scenes, cherubs, and those depicting popular biblical stores helped inform the illiterate masses of religious virtues.
• Gilding- gold appeared everywhere and was a principle element used to outline tiers within an intricate ceiling, highlight important medallions, offer additional sparkle around chandeliers, or just as a means of expressing wealth.
• Busts- composers, saints, kings all would have enjoyed being immortalized within small caverns located within complex, layered ceilings. Secular vs. religious spaces often determined who would have made the cut to be included.
• Floral elements- secular spaces used flowing, carved flower design (often local fauna or previously unseen exotic species) which often "spilled" out of basket designs set into corners of a space. These were often painted in hues matching the rest of the space. 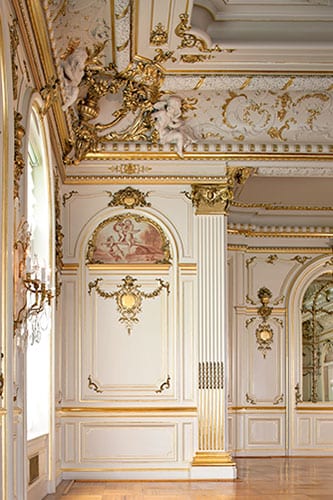 A baroque style found at The Cosmos Club in Washington, D.C.

Primarily associated with the French Royal Court, the Rococo style is the French interpretation of the more free-form Baroque style. While just as pronounced, the Rococo movement sought to soften much of the "rough" edges left when scale, symmetry, and color pallet are all but ignored. Symmetry was again reintroduced, yet spaces for unique ornamentation were balanced in scale, style, colors, and content with a counter piece placed either opposite in a space or adjoining. No one person better embodied the style and meaning of Rococo than Louis XIV, the "sun king." Under his rule magnificent palaces like Versailles and Louvre were created and richly embellished according to the Rococo style. Unlike the traditions of the Baroque style, Rococo is entirely secular and is tasked only with exemplifying and amplifying the power of France, specifically the French Royal Court and the king. Much of the focus was on wall paneling, draperies, furniture, and object d'art. Ceilings were often were left unadorned, except for a large centralized rosette and chandelier-- subsequent chandeliers in the corner were also given scaled-down rosettes.

• Paint- most ceilings were painted a uniform color, with pale blue to mimic the sky being the most popular choice. Grand rooms often had the wall color carried onto the ceiling to enhance the feeling of space.
• Plaster Boarders- most plaster ceilings received some geometric boarder design, often evoking the plaster wall paneling within the same space. These were sometimes embellished further by including floral elements, such as blooming flowers and creeping vines. Invariably, they were adorned with gold leaf. 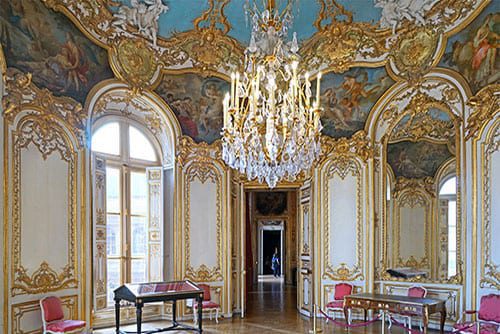 Distinctly British, Neoclassicism was the first truly British architectural movement. Borrowing from Rococo, Romanesque, and cultural heritage, the Neoclassic style would soon become one borrowed and added to by cultures around the word. The presence of the British Empire was ever expanding and they sought to draw parallels with other great empires, especially the Romans. This Roman influence, and the work of Andrea Palladian served as a way of grounding the movement and established many key principles: symmetry, strong building materials, proportion, and forced perspective. Ceilings often fell into a few different styles:

• Coffered- intersecting "beams" often situated "resting" atop columns or pillars create recessed ceiling panels, which aligned with the wall paneling and room layout.
• Rosettes- placed either centrally within a space accompanied by a few narrow trim moldings or placed with in a defined sub area, such as within a ceiling recess.
• Trim Molding- the simplest molding technique was to have trim molding run along the top of the wall, near or at where the ceiling and wall meet. Cornices could be large or small—depending entirely on the scale of the space. Various molding types were popular. Agapanthus leaves were also include. 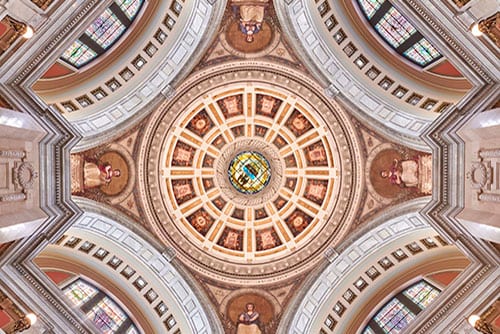 A Neoclassical style found at The Luzerne County Courthouse located in Wilkes-Barre, Pennsylvania

Plaster, back-lit glass, and trompe l'oiel paint comprise the three most popular ceiling finishing techniques of the Art Nouveau movement. Plaster was used to create decorative three-dimensional patterns around the edge of a ceiling, with trompe l'oiel often used to complement these three-dimensional patterns. Parisian cafes often turned raised plaster work into whimsical vines and other flowering designs, enhanced by paint. Plaster served as a blank canvas onto which elements were added by skilled painters. Curves, small concave or convex areas, and flowing, raised lines often snaked throughout a ceiling, irregularly. Decreased formality and often ignoring rococo symmetry rules, this was a distinct break from the past and issued in a new, modern age at the turn of the century. 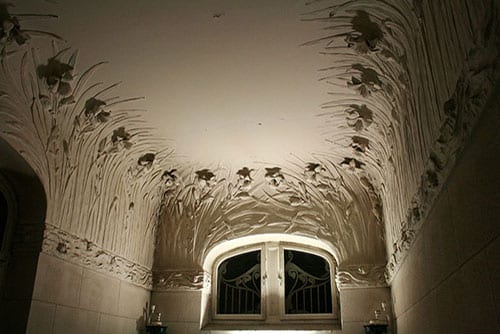 Rich and opulent, the beaux art movement used skylights, vaults, curves, layered molding, and extensive lighting to create dramatic ceilingscapes-- often paying homage to French tradition. Building further on rococo styling, previously neglected ceilings were transformed with the advent of new plaster mixes that allowed for ornamentation to be even more richly embellished. Extensive gilding and paint work brought shimming gold and colors to previously simple, blue ceilings. Coinciding with the turn of the century and invention and subsequent popularization of electricity, architects included light bulbs, both aesthetically pronounced and hidden behind molding/cornices, as a way of further bringing to life gilding and colors. Natural light was also very important. Skylights, both large and small, were incorporated throughout large public spaces.

• cornices- large moldings running along the top of the wall, near or at where the ceilings lowest layer met the wall. Architects often selected richly carved plaster motifs to adorn the face of the cornice, while hiding behind it lighting and spotlights, which were used to highlight elements of the ceiling.
• molding- curved molding along arches, bands outlining skylights, and other motifs that were geometric in design and appear symmetrically within a space.
• medallions/rosettes- raised plaster elements could often be found throughout a ceiling design, usually these were symmetrically arranged and often grounded a chandelier. 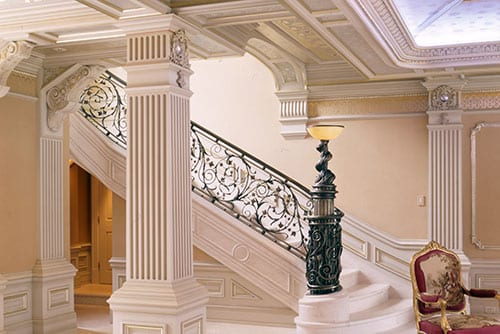 The extensive practice and refinement of plaster work, plus new plaster compositions and technological advances helped to catapult the popularity of intricate plaster detail, ensuring it would become a true art form. Though many modern and post-modern buildings do not emphasis rich plaster work, many do utilize complex curves and shapes as a means of adding interest and depth to the design of a space. While not as richly ornate as baroque of rococo styling, many modern movements like art deco maintain a simplified essence of a style that came before.

If you are in need of ornamental plaster restoration or repair services, please contact Canning Liturgical Arts.