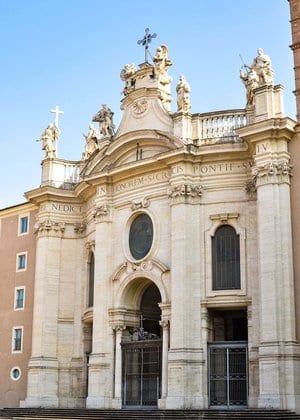 Facade of S. Croce in Gerusalemme, Rome.                            The church is called Basilica of the Holy Cross in Jerusalem because at one time the floor was covered with dirt from Jerusalem so that the Holy Land would be a part of the foundation. The statue on the far left holding the cross is St. Helena and she is mirrored by a statue of her son, Constantine.

The story of St. Helena begins as any other might but her fierce response to adversity and passion for truth set her apart and allowed her to accomplish incredible feats. She was a common woman who fell in love with a soldier, Constantius. They were married and about the year 272AD, they had their first and only child, a son.  Constantius quickly rose to the rank of officer, to governor, then Praetorian Prefect, until finally, the ultimate position of Caesar in the Tetrarch Empire created by Diocletion. With this new elite title, he was obliged to divorce his common wife for a more suitable match. There is little writing of St. Helena’s life following the divorce, until her son, who became known as Constantine the Great, outshone the dreams of his father and became emperor in the west, took control of Rome and by 324AD, had commandeered the entire empire.

The Edict of Milan issued in 313AD famously brought about the beginning of the end of Christian persecution in the Roman Empire. The success of this Edict could not have been without the influence of Constantine and his interest in Christianity. Constantine’s biographer, Eusebius, credits Constantine with his mother’s conversion to Christianity (Eusebius, Life of Constantine). However, Constantine did not convert until on is deathbed. Helena was a zealous woman with a profound love and interest in the history of Catholicism. In her mid seventies set about a pilgrimage, from Rome to the Holy Land, to find the relics of Christ’s life and death.

The Roman Emperor Hadrian destroyed much of Judea and Jerusalem during his time in power (117-138AD). He forbade Jews in areas of Judea and renamed the city. Any semblance of Judaism left in Jerusalem not demolished during the revolt in 70AD, Hadrian raised to the ground. This was his way of abolishing the Jewish religion in that immediate area and Hadrian applied the same tactics to irradiating the Christians by similarly leveling Mount Calvary and the site of Christ’s tomb. Despite the destruction of these sites, Hadrian quite conveniently marked their locations by building pagan temples directly on the sites. When Helena arrived they were demolishing these pagan temples providing the perfect opportunity to uncover the relics and artifacts she sought. There is some speculation on the exact account of the discovery of the True Cross but the general story is as follows. Three crosses were found in a water cistern beneath the ruins of the temple. The natural question arose, “Which of the three is the cross of Christ?” A woman, dying of some unknown disease, was brought to the site and each of the crosses touched to her. At the touch of the third cross, she was healed thus identifying the True Cross. Helena is attributed with finding many relics from the life and death of Christ including Christ’s nativity crib, the robe worn by Christ prior to the crucifixion and the nails that pierced Christ’s hands and feet.

At each of the sacred sites Helena discovered, Constantine commission a beautiful church. The churches include the Church of the Nativity in Bethlehem and the Church of the Holy Sepulcher in Jerusalem as well as many churches in Rome and in the newly established capital of the empire, Constantinople, now Istanbul. Helena is also attributed with bringing from Jerusalem to Rome the Sacred Steps that Christ climbed on the way to His trial. She is said to have climbed the stairs on her knees and such is the tradition to this day.

St. Helena was a pioneer in the preservation of church history, artifacts and relics as well as a patron of beauty and sacred art. As a company invested in preservation and promulgation of all that is good, true and beautiful in relation to Christianity and the subsequent decorative arts that illustrate the mysteries of faith, St. Helena, is to us, a true heroine.

If you’re interested in reading more about Saint Helena, we highly suggest Evelyn Waugh’s Helena. The book explores different myths and legends of the time to fill in the gaps of we know to be true of Helena’s story. The New York Herald Tribune put it well:

In Helena, the play of words and the fireworks, the exquisite descriptions of landscapes, and even the finished portraits of the heroine, her husband, and her son, are always subordinate to the author’s broad vision of the mixed anguish and hope with which the world of Constantine’s time was filled.